One of the areas which I have been spending a lot of time on recently is visualization strategies for complex relationships. Most commonly this is a problem that I find in time series data, where we have some relationship between two variables, which changes over time. Since most plots are shown as two dimensional images, including a third characteristic like time can be difficult.

I have been trying out some new code within my analysis of the minimum wage and nonstandard work arrangements. I look at how the number of people receiving any pay as a nonemployer establishment, which generally includes any unincorporated self-employed individual, relates to changes in the minimum wage. Do we see more people taking up work as independent contractors when the minimum wage increases? Do more people work in the gig economy, driving for Uber and Lyft or selling on Etsy?

Below you can see the static full time period plots and the animated annual comparisons using nonemployer statistics from the census and county level deployment data for Uber. 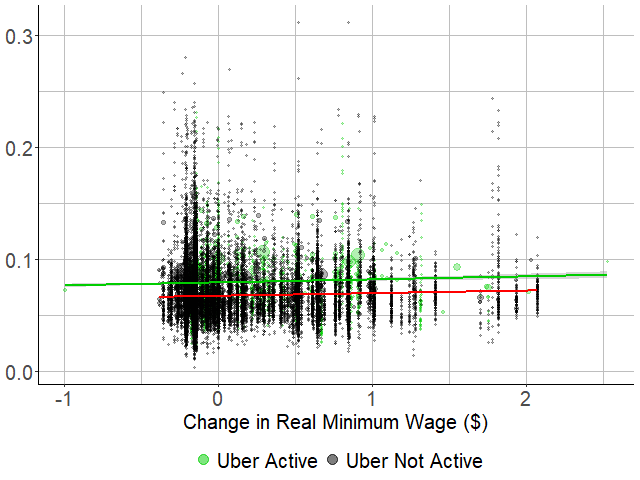 The figure above describes the relationship between the number of nonemployer establishments per person in any given year, and the change in the real minimum wage, across all industry types. A very slight positive relationship can be seen in the figure on the left. This implies that increases in the minimum wage correlate with an increase in the number of individuals entering self-employment and independent contracting. When splitting between counties where Uber is and is not active, no substantial difference in the slope appears. Across all NAICS industries, Uber appears to shift the level, and is not related to the relationship between the minimum wage and establishments per person, without accounting for either year or county level fixed effects. 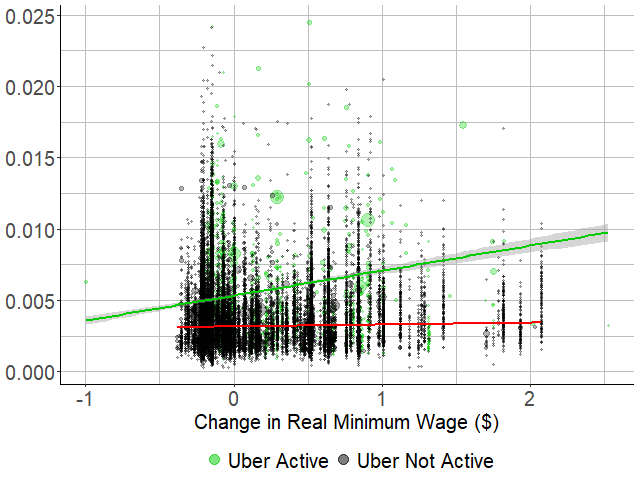 The figure on the left now describes the same relationship as the figure we just saw, but for the subset of transportation and warehousing services. So now instead of looking at every type of unincorporated self-employed job, we can see just those involved in transportation and warehousing. This captured Uber and Lyft drivers as well as traditional taxi drivers. For counties with Uber active, the number of nonemployer establishments per person appears to be positively related to increases in the minimum wage in contrast to counties without Uber, which appear to have no significant relationship.

We can see in the figure on the right that while Uber is inactive, the relationship is very similar to that of all nonemployer establishments, but once Uber becomes available, the positive relationship shines through.

I show in my paper “The Minimum Wage, Self-Employment, and the Online Gig Economy” that this positive relationship is more then just coincidence.

This is the first day of the rest of this websites life! Happy Birthday “academic website v5”